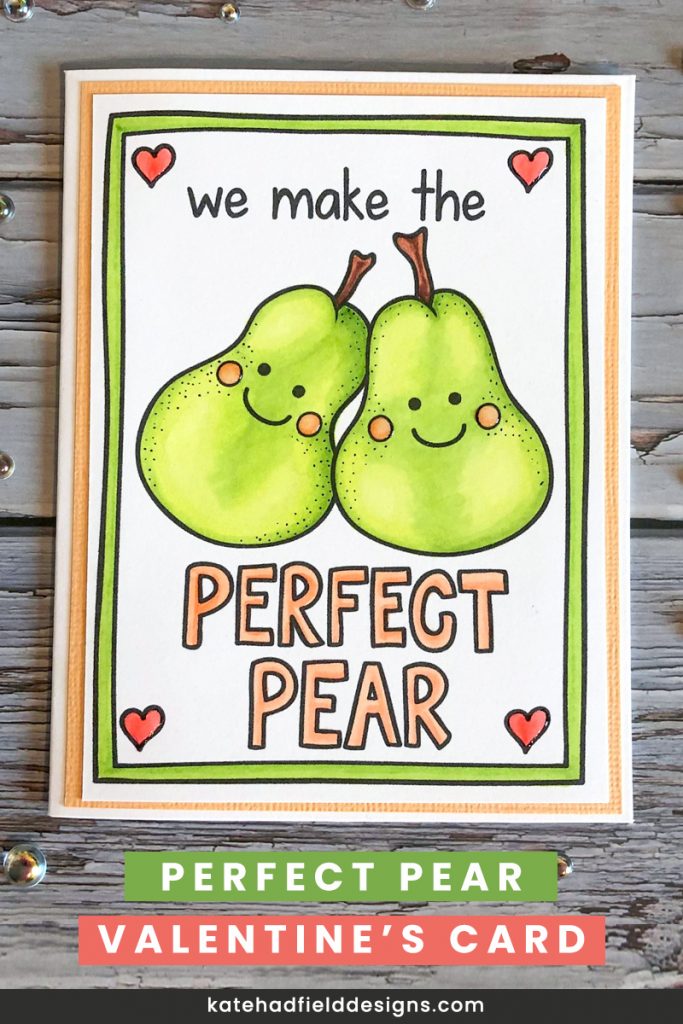 Hello my fellow crafters! Terri from Veegstez Creates back on the blog today, using the super cute Perfect Pear digital stamp from the Colour in Valentines collection by Kate Hadfield Designs.

For this tutorial, I wanted to create a beautifully simple, sweet and punny card, that would be suitable for anyone of any age. There are a number of similarly adorable stamps in the bundle, but this one jumped out at me straight away!

I first resized the image in a text document, so that it was around 4 by 5.25 inches. I the printed it out on some smooth white card stock, suitable for colouring with alcohol markers.

I then got out my handy colour swatches and chose a range of yellowy greens.

I started off colouring by identifying the areas of the pears that I felt would be the lightest, and colouring in these quite large areas with my lightest colour green YG00. I then used by next lightest green YG03 to colour in the rest of the white space and also added a thin line of ink around the entire edge of both pears. I went back over the lightest areas in YG00 to blend the two colours together, as I wanted a nice blended effect.

I then went in with a slightly darker green YG23, into the areas of cast shadow, such as the area where the pear on the left is slightly behind the pear on the right, so pretty much the whole right hand side. I also used some of the YG23 in the middle of centre of the left hand pear, on its tummy I suppose! No two fruits are exactly the same, so I wanted them to be a little different. I pulled out the YG23 with the YG03 to blend them, then added more YG00 if there were any harsh lines, before adding a bit more YG23 into the darkest areas. It is quite normal with alcohol marker colouring to have to keep going back over areas to get the effect you want, but worth it I think!

I then chose two peach tones YR00 and YR02 for the rosy cheeks and the punny sentiment. These were coloured very simply, with only a little blending required. You can see where I added the lighter YR00 on the sentiment and left space for the darker tone. I then used what I call a wiggle blend, where after adding the YR02 I used YR00 and wiggled the brush in small gentle motions to blend the two together a bit.

Next I coloured the frame in using YG03 and YG23, again just blending them slightly using my wiggle method, to try to avoid a striped effect.

The next step was choosing the colours for the hearts and pear stalks. I chose RV13 and RV14. You can see where I applied the lighter RV13 on the curved parts of the hearts and left a gap for the darker RV14. I then coloured over the whole of each heart in RV13, which blended the two together. I chose E15 and E18 for the stalks, using the darker E18 nearer to the top of the pear where there would be case shadow and also through the centre of each stalk, to give them some dimension. Again, I applied E15 over each stalk to blend the two together.

The final steps were to assemble the card. As the image is designed with its own wavy frame border, I cut a nice small border around that, making it even on all four sides. I chose a peach coloured textured card for a mat for the coloured panel, as it was similar to the peach markers I had used and cut that to be between the size of the card blank (4.25 x 5.5 inches, American size A2) and the card panel (4 x 5.25). Then I adhered the card panel to the mat and the mat to the card blank.

For the finishing touches, I used Tonic Crystal Glaze on the hearts and the rosy cheeks. This is like a glue, which dries clear and shiny and can be used to give a bit of something extra/fun to your cards, and makes them have a bit more something special. I also used a black glaze pen to add small dots along the outer edges of our cute little pear couple, as actual pears have these sorts of markings and I thought they also look a bit like freckles!

I really enjoyed making this cute card and this bundle of card stamps is fab as the cards are effectively designed for you, so you can make them simple, for example for children to make, or add your own artistic flair for more advanced crafters. I hope you enjoy this cute card which (sshhhh) is going to be my Husband’s Valentine’s Card!

Hi! I’m Terri Kelly and I love crafting. My main passion is cardmaking and papercrafts. I am building my own Craft Brand, Veegstez (hard G) Creates, and have growing followings on YouTube, Facebook and Instagram. I love working with talented Designers and Craft Companies who sell amazing products and connecting with other crafters and being part of the amazing crafty community that spans the globe! I also promote the positive impact of crafting on our wellbeing and how it can help us cope with things like Long Term Health Conditions (I have multiple invisible illnesses) and difficult life events. I am excited to see how my crafting career will evolve and where it will take me and am incredibly grateful that I have found this wonderful community and that I am able to contribute to it!