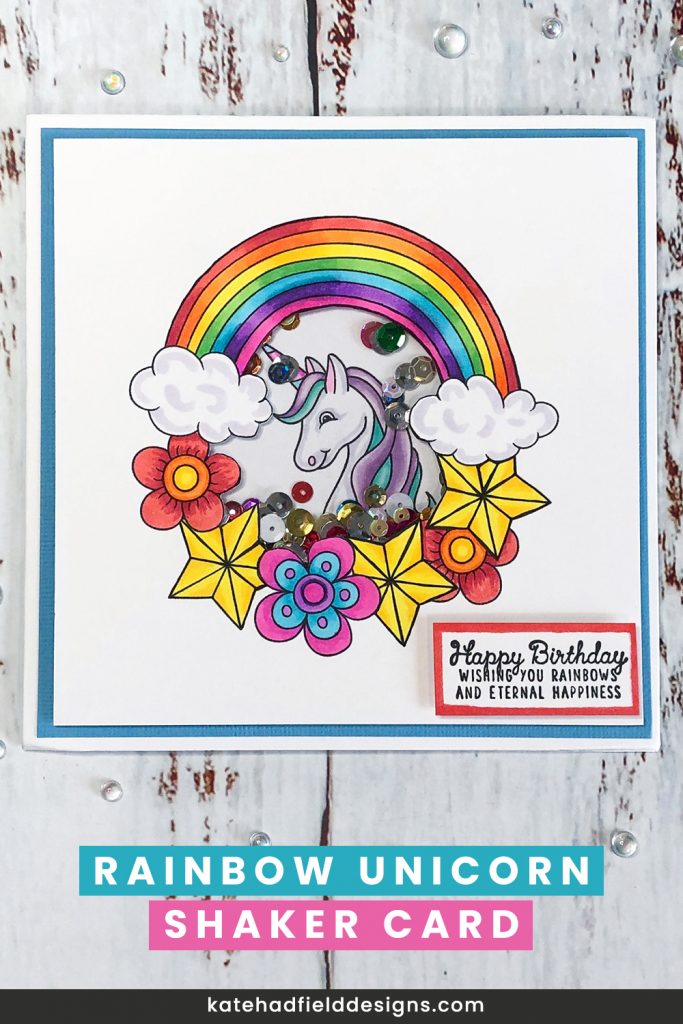 Hello, it’s Terri back on the blog today with a tutorial for a fun, magical make that would be great for anyone of any age who loves magic and whimsy!

I used Kate’s “Over the Rainbow” digital stamp set to create a magical wreath, with the top being formed by a rainbow and the bottom made up of stars and whimsical florals. I arranged the wreath by dragging and dropping the images into a text document and resizing the elements so they were the size I wanted them to be (to fit nicely into a 5.5 inch square panel). I also sized the Unicorn so that it would just have it’s head showing through an aperture in the front of the card.

I printed the wreath and the unicorn onto a sheet of Neenha Solar White cardstock which is great for colouring with alcohol markers. I coloured this image quite simply. I had to google the colours of the Rainbow for photos to make it true to life and then chuckled when I looked at the whimsical scene I was actually creating! It’s card making – it can be any colour you wish and please don’t ever get hung up on that kind of thing – just have fun! In my last few posts I have included quite detailed instructions on how I colour with alcohol markers, but for this post, the tutorial is more around the technique of making a shaker card and demystifying them for anyone who thinks they’re too advanced. I did pay attention to making my images look rounded by using several shades of the same colour, but in a much simpler way. One tip for colouring a Unicorn though, or anything white, is to pick a pale colour, I love BV00 or BV000 which is a very pale lilac, to just add some depth and dimension, by using it in areas of shadow.

I cut my page apart and cut the wreath with my guillotine to be around 5.5 inches square. I then used a craft knife to carefully cut away the inner portion of the wreath. I then touched up any uneven areas of black ink using a fineliner.

I then cut a piece of acetate (you could also use leftover packaging from kids toys etc.) into a square a few centimetres larger than the aperture. I chose a square die that was larger than the aperture, but not too much larger. I then cut three pieces of heavyweight 300gsm card stock and cut squares into the centre of each. There are two main ways to create a shaker card 1) is to build up “walls” for your shaker elements using foam tape and 2) is to build up the walls using card stock, which leaves a well to put your sequins/seed beads/glitter etc into. I have moved more towards the latter option, which is what I did to make this card as I find it easier than messing about with lots of foam tape, plus it makes the card more sturdy.

Next I stuck the piece of acetate over the aperture at the back, using some strong wet glue. I was using a pre made 6 inch square card blank so found a nice piece of textured blue cardstock that matched my colour palette and trimmed it to be 1/8 inch smaller than 6 inches to leave a perfect border around the coloured panel. I glued this card panel to the front of the card.

Next I added glue to one of the card panels with the square aperture in the centre and glued it to the front card panel, ensuring none of the edges of the square were visible through the aperture. It doesn’t matter if there is any card hanging off around the edges of the card panel, as we can trim them off with some long bladed scissors. We have now sandwiched the acetate between the front panel and the first of the three card panels with square apertures. I then glued down the other two panels the same as the the first. We now have a deep enough well to add in our shaker bits. If you wanted to add larger shaker elements, you could cut a few more panels to create a taller well.

The next step is to line up the part of the Unicorn you want to be seen through the aperture. I did this and trimmed of the edges that would have been over hanging. I added a colourful mix of sequins from my stash and then added glue to the third square panel and adhered the Unicorn panel to it. After pressing down firmly to adhere the glue, giving your shaker a shake to see the results of your efforts is very fun!

I found a suitable birthday sentiment stamp and stamped it onto a scrap of the card I had been using for the project and cut it down to a small rectangle. I used one of the red Copic markers I had used for the colouring to draw a thin line around the edge as I wanted to adhere it to the bottom right corner of the front panel which was white and I wanted it to stand out. I adhered the sentiment and then adhered the completed shaker panel to the card blank with the blue square on it using wet glue and being careful to create a nice even margin for the border. These final steps really help elevate your card to the next level.

Now our magical shaker is complete! Everybody loves a shaker card, as it’s not something you can buy in the shops and it does have somewhat of a “How did they do that?” factor.

I hope you have enjoyed shaker card tutorial and it has given you some tips and inspiration. I’ll see you again soon with something else to get your creative juices flowing.

Hi! I’m Terri Kelly and I love crafting. My main passion is cardmaking and papercrafts. I am building my own Craft Brand, Veegstez (hard G) Creates, and have growing followings on YouTube, Facebook and Instagram. I love working with talented Designers and Craft Companies who sell amazing products and connecting with other crafters and being part of the amazing crafty community that spans the globe! I also promote the positive impact of crafting on our wellbeing and how it can help us cope with things like Long Term Health Conditions (I have multiple invisible illnesses) and difficult life events. I am excited to see how my crafting career will evolve and where it will take me and am incredibly grateful that I have found this wonderful community and that I am able to contribute to it!