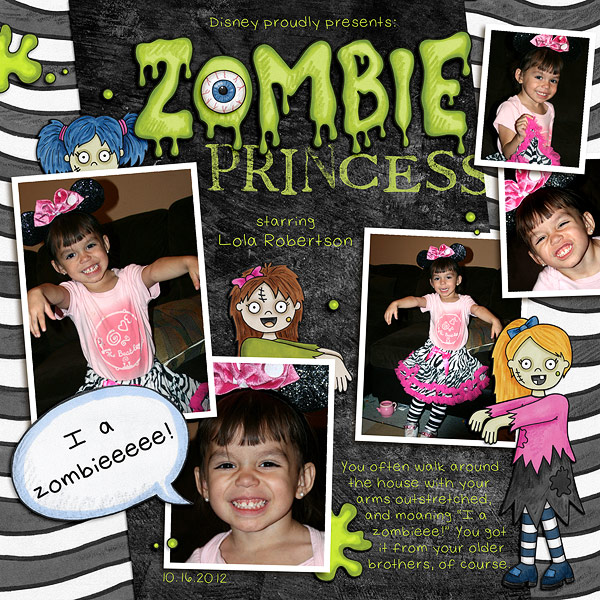 As we’re celebrating our Halloween Bash this weekend I thought it would be fun to showcase some inspiring Halloween layouts, so I asked my team members to pick their favourites to share with you! I hope you enjoy this collection of spooky scrapbook pages!

“This layout is quite possibly my favourite layout ever (though we scrappers know it’s hard to choose just one). My daughter took out some dress-up clothes and put this ensemble together herself, Mickey Ears and all. How could I not take a billion pictures of my beautiful li’l zombie? Kate’s doodles sent me over the edge with happiness because I had the PERFECT photos to scrap with them!!”

“For a long time, the number of kids coming to our door on Halloween was dwindling, until we only had 18 kids in 2013. We thought our neighbourhood was just getting older, but I discovered that my neighbour across the street had over 100 kids come to her door! What? I did not want to be THAT house that kids avoided on Halloween! So last year, I set out to change our situation. I looked at all the possible causes (there’s no sidewalk on our side of the street, the houses on either side of us are always dark because those neighbours are party poopers, and you couldn’t see the front door from the street because of the landscaping). And then I came up with a solution! We would set up in the garage! We could easily be seen from the street & the sidewalk on the other side of the street, I played Halloween music, and I set up lighted pumpkins so everyone would know we had goodies for Halloween & they should come to our house! It ended up being a dreary evening. It was cold & raining, but we had over 50 kids!!! I considered this a success!”

Not That Family by Rebecca

“My birthday is in October and growing up, my birthday party themes were always halloween related… scary witches, spooky ghosts, thumping heart beats coming from the stereos. Now that I’m an adult, I don’t care for that side of halloween… I want my son to remember the fun of the holiday.”

“I chose this layout for several reasons. First of all, I used a non-Halloween kit to show off my son’s costume. He went as a pirate. I used a pirate-themed kit

I love how versatile digi-kits are. They can be used for so many different things, and oftentimes for more than what they’re specifically designed for. The second reason why I chose this layout is that it will be a permanent reminder that not only did my son dress up as a pirate, but he specifically dressed up as Don Durk of Dowdee – a poem that his grandma loved to read to him. And so, for the journaling, I just included the full poem so that generations from now, that memory will live on.” 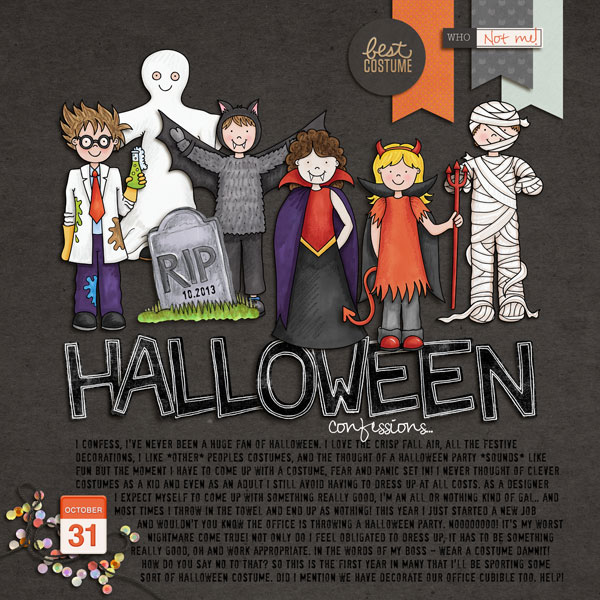 “I like this photo less page.. I used the doodles to tell a story.”

“I love this page because all the doodles add to the whimsy of the photos. Disney World’s “Mickey’s Not So Scary Halloween Party” is the perfect paring for some not-so-scary Halloween doodles!”

This is Halloween by Jenna

“This layout makes me smile every time I see it. Dad took our three oldest kids to the Disneyland Halloween Party and Mom missed out. The ONLY thing I was sad about was missing THIS photo op. To see the kids with Jack Skellington is awesome and the colors just SCREAM Halloween!”

“I have the most creative friends. Every year, one family goes all out for “Begger’s Night.” They’ve done everything from the moon landing, to the TARDIS, to this year’s planned “Driveway on the Edge of Forever” (from the classic Star Trek episode). Harry Potter has inspired multiple years – one year their front yard became Hogwarts, and another year it was a Quidditch stadium. The coolest part is that several of our friends participate in costume to make the whole thing come to life. It’s not just the neighborhood *kids* who have to come every year to see what’s happening!”

Kate Hadfield creates hand-drawn graphics for scrapbookers, crafters, teachers and creative peeps like you! Kate enjoys her artsy process (and getting inky fingers!) and loves that her designs help scrapbookers to record their memories, and teachers and crafters to create beautifully illustrated projects and resources. She lives in north west England and enjoys long walks in the country with her dogs and watching Doctor Who.

Welcome to Kate Hadfield Designs. We use cookies to ensure that we give you the best experience on our website. OkLearn more